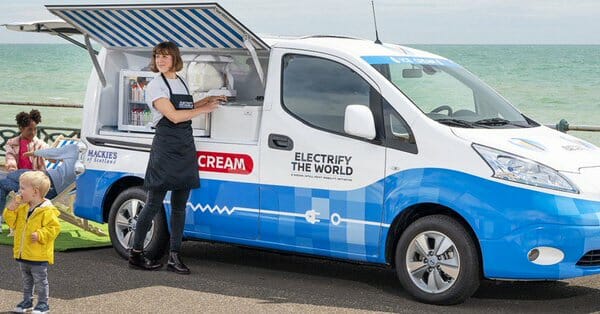 Japan-based automaker Nissan has released a prototype of a zero-emission ice cream van based on its own electric van.

Ice-cream vans have been singled out as being responsible for a lot of air pollution, on account of mostly running on diesel engines and having to keep the engine idling throughout the day, both for the frequent short moves between prime locations and also to help keep the van’s refrigerators cold. Due to their target market, ice-cream vans also typically park close to playgrounds, schools and other sites full of children.

Nissan worked with ice-cream maker Mackie’s of Scotland – which powers its own dairy farm using wind and solar energy – to develop the prototype van, which is based on the e-NV200, a fully electric light commercial van.

“Ice cream is enjoyed the world over, but consumers are increasingly mindful of the environmental impact of how we produce such treats and the ‘last mile’ of how they reach us,” said Kalyana Sivagnanam, managing director for Nissan Motor GB. “This project is a perfect demonstration of Nissan’s Intelligent Mobility strategy, applying more than a decade of EV experience and progress in battery technology to create cleaner solutions for power on the go – in ways customers might not expect.”

“By eliminating harmful tailpipe emissions and increasing our use of renewable energy, we can help make this a better world for everyone.”

According to Nissan, the prototype van uses a battery to power its motor, while its refrigerators and other ice-cream equipment are powered by an Energy Roam system, a mobile power pack which gathers energy from a solar panel on the roof of the van and can also be recharged via a mains supply.

The prototype van was announced to coincide with Clean Air Day. Today, Mayor of London Sadiq Khan announced that September 22, 2019, would be a ‘Car Free Day’ in London, with some central streets shut to traffic and people across London’s boroughs encouraged to enjoy vehicle-free streets. Almost every area in London severely breaches WHO standards for PM2.5 particle pollution, which is produced in dangerous quantities by diesel engines. Particulate pollution can cause permanent DNA mutations, respiratory and cardiovascular disease and premature death.

Traditional diesel ice-cream vans have already been banned in some areas of London, as councils crack down on toxic air pollution, notably the nitrogen dioxide and black carbon particles emitted by most diesel engines. Camden and Westminster councils have both designated areas as ‘no ice-cream trading’ zones, with enforcement officers empowered to issue stiff penalty fines for any sellers caught flouting the ban.

Ice-cream vans are already banned from areas owned and operated by the Royal Parks in Westminster. Access to mains electricity is provided instead.

Other London councils are considering installing electricity power points near parks and street markets, so that ice-cream sellers can operate without their van engines constantly running. Islington council has already installed power points, with Richmond and Tower Hamlets known to be considering similar measures.