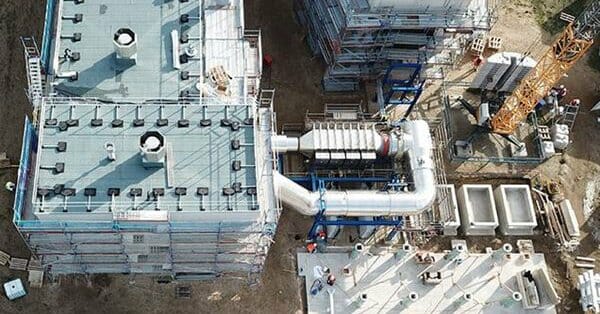 Siemens Gamesa, a company known more famously for its offshore wind turbines, is nevertheless a large-scale renewable energy technology manufacturer, with its hands in various renewable technology pots. One of these pots is energy storage, and last week the company announced the beginning of operations of its electric thermal energy storage system (ETES), claimed by the company as a world first. The opening ceremony for the pilot plant in Hamburg-Altenwerder was held last week to celebrate the beginning of operations.

The newly-opened electric thermal energy storage system is billed by Siemens Gamesa as “The Future Energy Solution” and as costing “significantly” less than classic energy storage solutions. Specifically, according to the company, even at the gigawatt-hour (GWh) pilot scale, ETES “would be highly competitive compared to other available storage technologies.”

The heat storage facility consists of around 1,000 tonnes of volcanic rock which is used as the storage medium. The rock is fed with electrical energy which is then converted into hot air by means of a resistance heater and a blower that, in turn, heats the rock to 750°C/1382 °F. When demand requires the stored energy, ETES uses a steam turbine to re-electrify the stored energy and feeds it back into the grid.

The new ETES facility in Hamburg-Altenwerder can store up to 130 MWh of thermal energy for a week, and storage capacity remains constant throughout the charging cycles. “With the commissioning of our ETES pilot plant, we have reached an important milestone on the way to introducing high-performance energy storage systems,” said Markus Tacke, CEO of Siemens Gamesa Renewable Energy. “Our technology makes it possible to store electricity for many thousands of households at low cost. We are thus presenting an elementary building block for the further expansion of renewable energy and the success of the energy transition.”

“Decoupling generation and consumption of fluctuating renewable energy via storage is an essential contribution to implementing the energy system transformation,” added Andreas Feicht, State Secretary at the Federal Ministry of Economics and Energy, who was also in attendance for the opening ceremony. “We, therefore, need cost-effective, efficient and scalable energy storage systems.”