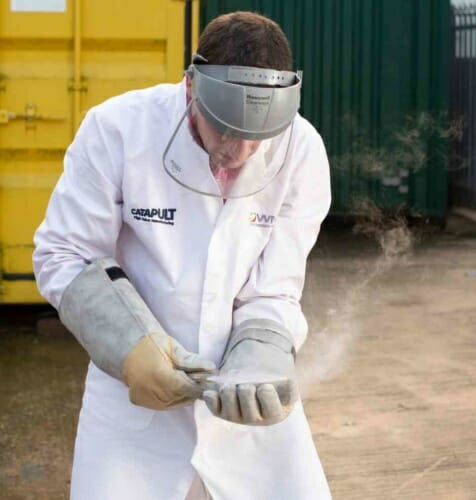 As sales of electric vehicles increases, there is more concern for the transportation of damaged and defective lithium-ion battery packs. Currently, it is an expensive process, as they are put in an explosion-proof box that costs €10,000 and a further €10,000 for the UN accreditation, for which EV manufacturers are picking up the bill.

But now, Researchers from WMG at the University of Warwick in collaboration with Jaguar Land Rover engineers have been able to freeze batteries with liquid Nitrogen.

A second life for repurposed EV batteries in off-grid locations

The Engineer Q&A: Battery technology and the future of electrification

Explosion boxes are used to contain the battery in case it goes into the thermal runway, an overheating condition which can lead to violent explosions and toxic gases being released. However being able to cryogenically flash freeze the batteries completely removes the risk of an explosion, and could, therefore, mean they can be transported safely in a plastic box.

Researchers who were part of the ELEVATE project funded by ESPRC, Catapult and supported by Jaguar Land Rover tested the batteries activity before they froze cells with liquid nitrogen and after, they also drove nails through the frozen cell to test the safety of them, and managed to show that their performance was not affected after freezing.

When being transported batteries will have to be kept in a lorry at -35 degrees, however, the amount of packaging is significantly less than explosion-proof boxes, making the process more sustainable.

Commenting on the project WMG’s Dr Thomas Grandjean said: “Transporting damaged and defective batteries is an expensive and unsustainable process, however being able to freeze them with liquid nitrogen could save thousands of pounds and help electric vehicle manufacturers be more sustainable.

All credits to original source: