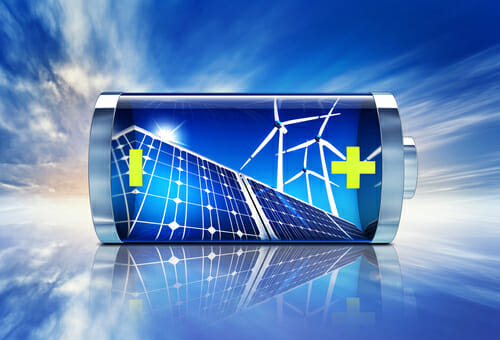 The battery craze isn’t really about batteries at all. It’s about something far grander than a battery, which is simply a conduit to a much bigger story.

The holy grail is energy storage.

And while perpetually bigger batteries themselves have emerged as the dominant solution to our energy storage needs, their reliance on rare earth elements and some metals that are controversially sourced, as well as the fact that their product life is quite limited, indicates they are simply a stop along the way to more creative innovations.

Already, there are several challenger solutions that have the potential to rise above the battery as the answer to our energy storage needs.

One of these solutions is gravity. Several companies across the world are using gravity for energy storage or rather, moving objects up and down to store and, respectively, release stored electricity.

One of these, Swiss-based Energy Vault, uses a six-headed crane to lift bricks when renewable installations are producing electricity than can be consumed and drop them back down when demand for electricity outweighs supply. The idea may sound eccentric but kinetic energy, according to a Wall Street Journal report on these companies, is getting increasingly popular.

The idea draws on hydropower storage: that involves pushing water uphill and storing it until it is needed to power the turbines when it is released downhill. Instead of water, these companies use gravity, essentially lifting and dropping heavy objects. Energy Vault uses bricks and says 20 brick towers could power up to 40,000 households for a period of 24 hours. Related: Oil Suppliers Slash Prices To Save Asian Market Share

Another company, in the UK, lifts and drops weights in abandoned mine shafts.

Gravitricity, which last year ran a crowdfunding campaign that raised $978,000 (750,000 pounds), is using abandoned shafts to raise and lower weights of between 500 and 5,000 tons with a system of winches. According to the company, the system could be configured for between 1 and 20 MW peak capacity. The duration of power supply, however, is even more limited than Energy Vault’s, at 15 minutes to 8 hours.

The duration of the power supply is an important issue. When the wind dies down and the sky is overcast, this could last more than a day as evidenced by the wind drought in the UK two years ago, when wind turbines were forced to idle for a week.

Gravity-base storage is one alternative to batteries, some of it cheaper than batteries, but for the time being, less reliable than batteries if we are thinking about a 100-percent renewable-powered grid. Another solution is thermal storage.

EnergyNest is one developer of thermal energy storage. It works by pumping a heated fluid along with a system of pipes and storing it in a solid material. The heat flows into the material from top to bottom and is released into this material where it stays until it is needed again. Then, the flow gets reversed, with cold fluid (thermal oil or water) flowing from the bottom up, heating up in the process and exiting the storage system. Related: Restarted Saudi, Kuwaiti Oilfields To Pump 550,000 Bpd By End-2020

Then there is liquid air storage as an alternative to batteries. It works by separating the carbon dioxide and the oxygen from the nitrogen in the air and then storing this nitrogen in liquefied form. When needed to generate electricity, it is regasified. The process of liquefaction is powered by the excess electricity that needs to be stored and when a peak in demand requires more electricity generation, it is reheated and regasified, and used to power a turbine. According to experts, the process is not 100-percent efficient, with rates ranging from 25 percent to 70 percent.

Yet another potential alternative to batteries for energy storage is using geothermal energy to store heat and then releasing it to generate more electricity. The so-called sensitized thermal cells developed by researchers from the Tokyo Institute of Technology are technically batteries, as they use electrodes to move electrons. But on the flip side, it does not work with intermittent energy such as solar or wind. It taps the potential of geothermal energy, an underused renewable source.

Not all of these energy storage idea swills take off. Not all of them will prove viable enough to become widely adopted. Yet some alternatives to batteries will likely work well enough to provide an alternative to the dominant technology. Alternatives are important when you are aiming for 100-percent renewable electricity.

Failing that, we could simply use our EV batteries as energy storage for excess power from solar and wind installations, as the International Renewable Energy Agency said earlier this month. While a strain on the grid when they charge, IRENA said, electric cars could juice up at the right time to take in surplus power and then release it back into the grid if that grid is a smart one. In 2050, around 14 terawatt-hours (TWh) of EV batteries would be available to provide grid services, compared to 9 TWh of stationary batteries, according to the agency. One way or another, slowly and with difficulty, we are heading into a much more renewable energy future.

All credits to Irina Slav / Oilprice.com/