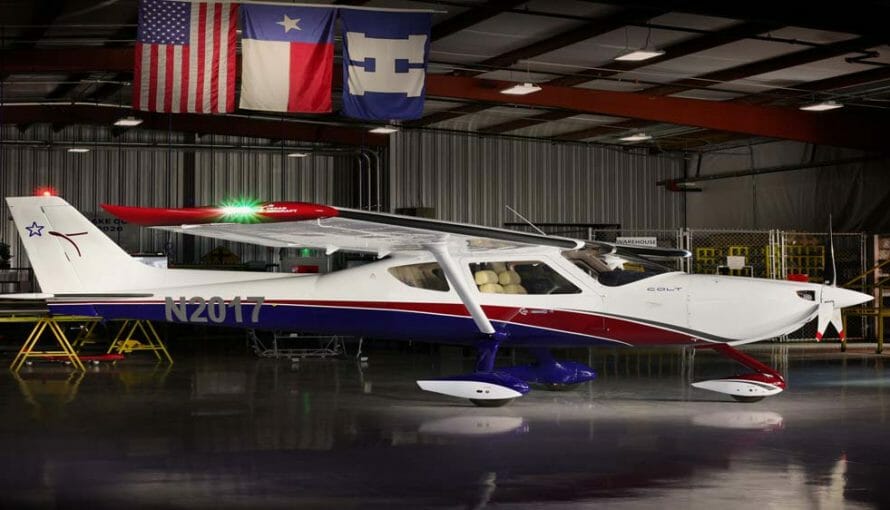 Based on Texas Aircraft’s popular Colt S-LSA (see image), the eColt will have a comfortable two-seat cabin. It will fill a growing demand for ecologically-friendly flight training, as well as regional transportation in Brazil and throughout the world. Initially, OXIS projects that the flight time will be in excess of two hours and an approximate range of 200NM.

Huw Hampson-Jones, CEO, OXIS Energy, said, “ OXIS Li-S technology offers significant benefits to aviation. This collaboration between OXIS Energy, Texas Aircraft, and two other forward-thinking Brazilian corporations will put Brazil at the forefront of designing, manufacturing and exporting the electrification of regional aircraft worldwide. The partnership will create highly skilled jobs throughout Brazil, and contribute to major exports both in products, services and expertise.”

Matheus Grande, CEO, Texas Aircraft Manufacturing added, “We feel very proud and truly blessed to be working on this exciting programme with OXIS Energy. The opportunity to be at the forefront of the transformation Brazil’s private aviation to all-electric power is an amazing opportunity. With its wide cabin and exceptionally pilot-friendly flight characteristics, the eColt is going to be a fantastic airplane for flight training and personal transportation in Brazil and around the world.”

The use of Sulfur as a non-conductive material provides enhanced safety and is superior to current Lithium-Ion technology. Its 90kWh battery system, which is 40% lighter than current Li-Ion technology will be powered by its “High Power” cell at 400Wh/kg.

The Colt S-LSA is ideally suited for the training of commercial airline pilots. Despite the fallout from the COVID 19 pandemic, over the next decade there will be a growing shortage of commercial pilots throughout the world. Free from the high polluting effects of the lead-based fuel used in aircraft today, the all-electric Texas Aircraft eColt will provide an efficient, clean mechanism for new pilots whilst decreasing training costs substantially.

All of the aircraft’s key airframe and power components will be manufactured in Brazil. The aircraft will be designed and developed at the Texas Aircraft Manufacturing facility in Campinas. The Li-S battery cells will be made at the OXIS factory in Juiz de Flora. The powertrain will be supplied by WEG of Jaragua do Sul. The battery and its Management System (BMS) will be provided by AKAER Group of San Jose dos Campos.

Editor’s Notes:
OXIS Energy Ltd is involved in the design, development and now the move towards commercial production of Lithium Sulfur cells for battery systems. OXIS manufactures and produces all aspects and components in the making of the Li-S cell. OXIS does not use any toxic or rare earth material in the composition of its Lithium Sulfur cell technology. With over 41 patent families, OXIS has been granted 193 patents with 115 pending.

Texas Aircraft Manufacturing
Founded in 2017 in Brazil and based both at South Texas Regional Airport in Hondo, Texas, USA and Campos dos Amarais Airport in Campinas, São Paulo, Brazil, the team behind Texas Aircraft is solely committed to using modern technologies and materials to design and produce new-generation private aircraft that help pilots achieve their dream of aircraft ownership. The company is the designer and producer of the new Colt Light Sport Aircraft (S-LSA) and the designer of the eColt. For more information, visit: www.texasaircraft.com and www.flycolt100.com