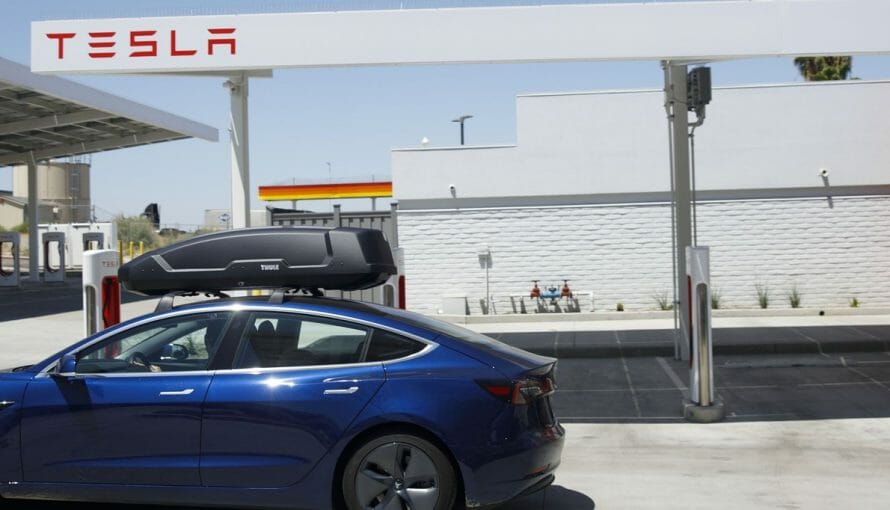 Tesla founder Elon Musk has unveiled his firm’s latest battery technology which promises more affordable cars that can travel longer distances, but the three-year timeframe necessary before commercialisation has not impressed investors.

Musk envisions future electric cars priced as low as $25,000 (£19,657) that will be able to drive themselves once the new battery tech comes to fruition. The new technology would slash the cost of batteries in half as well as extending their range by 56 per cent.

This implies that Tesla cars using the new batteries will be able to travel 500 miles or more on a single charge, surpassing the distance many internal combustion engine (ICE) cars can travel before needing to refuel.

The retail cost estimates are also significantly cheaper than Tesla’s lowest-priced car, currently the Model 3, which starts at $35,000 (£27,791).

“We don’t have a truly affordable car and that is something we want in the future,” Musk said during a showcase event dubbed ‘Battery Day’. Building an affordable electric car “has always been our dream from the beginning of the company,” he added.

However, investors were not impressed by the three-year timeframe stated by Musk, who has infamously underestimated shipping dates and production volumes of Tesla’s vehicles on many occasions. Tesla’s shares fell by more than 6 per cent in extended trading after Musk’s presentation.

Earlier this year, the automaker became the most valuable car company in the world, reaching a valuation of $208bn and overtaking rival Toyota in the process. While the latest share price drop may sound like bad news for the firm, the shares are still worth nearly ten times their value at this time last year.

Since that time, Tesla has posted four consecutive quarters of profits, reversing a long history of losses, whilst also boosting its production and laying the groundwork for future expansion by opening or beginning work on three more factories in Shanghai, Berlin and Austin, Texas.

Musk has seen his estimated personal wealth climb to $89bn (£70.31bn), the fifth-largest fortune in the world, according to estimates by Forbes magazine.

“What happens when companies get bigger is things tend to slow down. We are going to speed up,” Musk said.

Tesla will produce the new battery cells initially on a new assembly line near its vehicle plant in Fremont, California, with planned output reaching 10 gigawatt-hours a year by the end of 2021. Tesla and partner Panasonic now have production capacity of around 35GWh at the Nevada battery ‘gigafactory’.