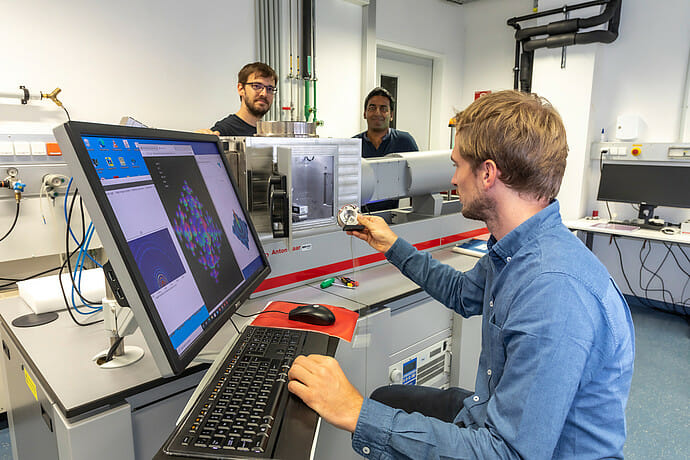 Similar to batteries, supercapacitors are suitable for the repeated storage of electrical energy. TU Graz researchers have presented a particularly safe and sustainable variant of such a supercapacitor in the scientific journal “Nature Communications“. This research was conducted with a SAXS system of Anton Paar.

The supercapacitor
The result of their intensive research work is the “hybrid supercapacitor”, a combination of battery and capacitor. It can be charged and discharged as quickly as a capacitor and can store almost as much energy as conventional batteries. In comparison to the latter, it can be charged and discharged much faster and much more frequently: while a lithium-ion battery achieves a service life of a few thousand cycles, a supercapacitor manages around one million charging cycles.

System made of carbon and salt water
A particularly sustainable, but so far quite unexplored variant of such a hybrid supercapacitor consists of carbon and aqueous sodium iodide (NaI) electrolyte, with a positive battery electrode and a negative supercapacitor electrode.”The system we are looking at in detail consists of nanoporous carbon electrodes and an aqueous sodium iodide electrolyte, in other words salt water. This makes this system particularly environmentally friendly, cost-effective, incombustible and easy to recycle,” explains Christian Prehal. He is the first author of the study and has recently moved from the Institute of Chemistry and Technology of Materials at TU Graz to ETH Zurich.

Small-angle X-ray measurement on the SAXSpoint 2.0
With the aid of small-angle X-ray scattering and Raman spectroscopy, the researchers were able to show for the first time that solid iodine nanoparticles are formed in the carbon nanopores of the battery electrode during charging, which dissolve again during discharge. This corrects the previously assumed reaction mechanism and has far-reaching consequences, as Christian Prehal explains: “Only due to the small size of the nanopores of less than 1 nanometer (1 millionth of a millimeter) the solid iodine remains stable. The degree of filling of the nanopores with solid iodine determines how much energy can be stored in the electrode. This enables the energy storage capacity of the iodine carbon electrodes to reach unexpectedly high values by storing all chemical energy in the solid iodine particles.” This new fundamental knowledge opens the way to hybrid supercapacitors or battery electrodes with incomparably higher energy density and extremely fast charging and discharging processes.
With targeted improvements, hybrid supercapacitors can now be put to use as a safe, non-flammable, cost-effective and sustainable alternative for stationary storage of electrical energy. This can be an attractive option especially for the storage of energy from photovoltaic cells in private households, for example.

New investigation method for electrochemical energy storage systems
The researchers achieved another breakthrough with regard to the applied investigation methods. In Raman spectroscopy, the interaction of light with matter is used to gain insight into the structure or properties of a material. Small-angle X-ray scattering (SAXS) makes structural changes during electrochemical reactions visible. Both methods took place in operando, i.e. live during the charging and discharging of a specially developed electrochemical cell. “Both operando Raman spectroscopy and operando SAXS were performed for the first time on a hybrid supercapacitor with aqueous NaI electrolyte at the Institute of Electron Microscopy and Nanoanalysis (FELMI) and in the soft matter application lab at the University of Technology in Graz. For the operando SAXS investigation, we have developed a special measuring cell for batteries and electrochemical energy storage devices,” explains Prehal. The results of the work show that operando SAXS is ideally suited to follow structural changes in a supercapacitor or battery on the nanometer scale and directly “live” during charging and discharging. This new investigation method could therefore be widely used in future in the field of electrochemical energy storage.

BatteryCell SAXS
Within this project a SAXS battery cell was developed. This battery cell is now on the market. Stefan Freunberger (until recently ITCM at the TU Graz, now at the Institute of Science and Technology Austria), Christian Prehal and colleagues from Anton Paar have collaborated on this development.