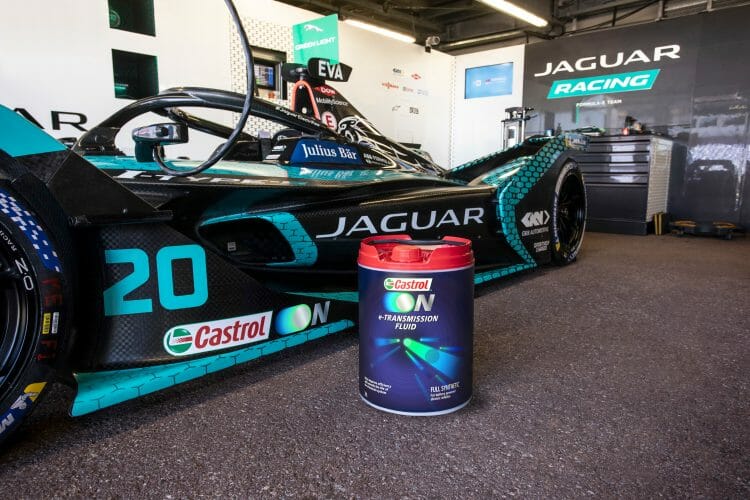 Castrol and the Jaguar Racing Formula E Team are working together to ensure the recently launched Castrol ON e-Fluids range delivers performance, efficiency and durability for the most demanding electrified powertrains. The two companies recently renewed their technical partnership and Castrol is the race team’s official supplier of advanced e-Fluids.

All three Castrol ON products – consisting of e-Transmission fluid, e-Thermal fluid and e-Grease – will be further developed and tested by Castrol and the Jaguar Racing Formula E Team to maximise performance on track. The lessons learned from Formula E will enable Castrol to optimise future generations of these products to benefit road-going electric vehicles (EVs).

The new Castrol ON branding made its debut on the Jaguar I-TYPE 5 race cars in the seventh round of the ABB FIA Formula E World Championship in Monaco on 8 May.

Race team development of Castrol ON e-Transmission fluid has focused on reducing friction and power losses, improving oil pressure supply and reducing temperatures within the critical components of the gearbox. This is helping to extend the life of the powertrain and improve the efficiency – critical factors for race and road EVs alike.

Switching to Castrol ON e-Grease is helping Jaguar Racing save weight in its Formula E race cars. The additives in the grease provide improved lubrication to the critical driveline components, reducing friction losses and overall temperatures thereby improving the durability. For electrified road cars, the improved efficiency of moving components has been found to improve driving range, one of the key factors affecting the mainstream adoption of EVs.

A.S. Ramchander, ‎Castrol’s Vice President of Global Marketing, said: “With the Monaco E-Prix launched, it’s a great time to reflect on a relationship which is now over 40 years old. The collaboration between Castrol and Jaguar within the demanding race environment of Formula E allows us to continue to develop, monitor and test advanced e-Fluids for both race cars and the road cars of the future”.

James Barclay, Team Director of the Jaguar Racing Formula E Team, said “Castrol’s engineers work alongside our own to overcome challenges and find performance gains. From e-Greases that improve efficiency and reduce rolling resistance, to e-Thermal fluids and e-Transmission fluids that keep the powertrain operating at optimum level, racing is the perfect test-bed to hone our respective products. Together this is proving to be a winning partnership.”

Jaguar Land Rover and Castrol’s successful on and off-track relationship builds on a long and fruitful partnership in motorsport dating back to the 1980s, including prestigious wins at Le Mans 24 hours in 1988 and 24 Hours of Daytona in 1990. Both companies believe that racing provides the optimal testbed for performance engineering. 20 years ago, the relationship expanded to road cars, with Jaguar Land Rover choosing Castrol as its preferred global strategic partner for lubricants technology.