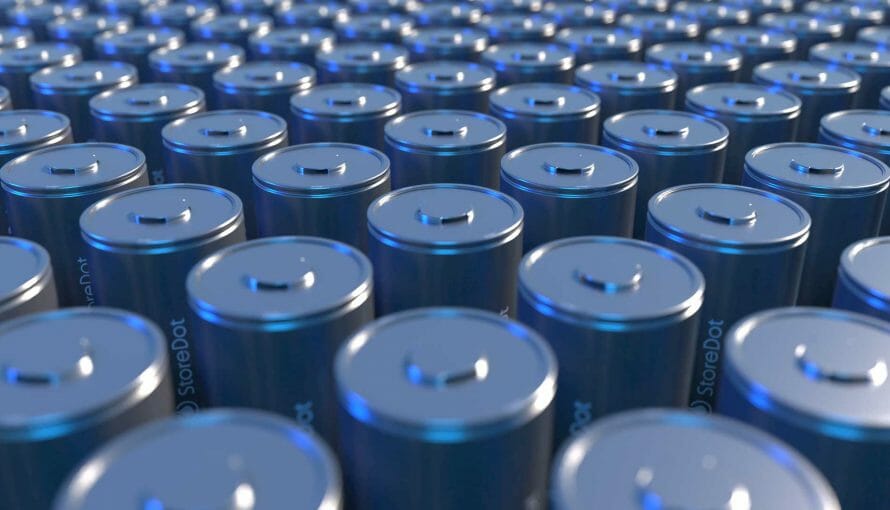 StoreDot’s extreme fast charging cylindrical cells utilize a 4680 format, the one increasingly favored by global car makers, and have been in development for over three years. Pioneering work for these breakthrough technologies was kicked off at Warwick University in the UK with collaboration with StoreDot’s strategic partner – BP. It has been further developed harnessing experts from across the globe. The work is covered with five patents in the area of cell design and uses StoreDot’s continuous tab technology. Such cell design increases throughput and addresses safety and performance issues typically associated with the hard case structure of cylindrical cells. Testing at StoreDot facility has shown promising low levels of internal resistance. Cylindrical cell samples are now ramping up the production lines at EVE Energy, StoreDot’s manufacturing partner in China.

This breakthrough means that global automotive manufacturers will be able to use StoreDot’s XFC batteries, which deliver a 50% reduction in charging time at the same cost, in both pouch and cylindrical cell forms. Both formats are undergoing scale up process at EVE Energy and will be ready for mass production in 2024.

Dr Doron Myersdorf, StoreDot CEO “Achieving the goal of extreme fast charging a cylindrical cell in only 10 minutes has been on StoreDot’s technology roadmap from day one. After three years of vigorous development and testing, leveraging multiple vectors of our world class researches, I am hugely proud at the effective collaboration across our globe that enabled this important achievement. It’s highly significant that we can offer Electric Vehicle manufacturers the choice of cell formats, utilizing our XFC technology that will overcome the current barriers to EV ownership: range and charging anxiety.

“We are pleased that our silicon-dominant XFC battery cell chemistry is adaptable and can be applied to various packaging formats, to suit changing market needs. Both our cylinder and pouch cell form factors are designed to be safe, reliable and stable, and are expected to be produced at scale by 2024. We are in advanced discussions with a number of global automotive manufacturers and we plan to supply them with various XFC cells, enabling a rapid transition to a zero-emissions electrified future.”

StoreDot is in discussions with leading automotive manufacturers. It now has the ability to offer the automotive industry a clear technology roadmap using silicon-dominant XFC technology and then onto future generation extreme energy-density (XED), based on solid state technologies which are on target to enter mass production in 2028.

StoreDot is a pioneer and leader of extreme fast charging (XFC) batteries that overcome the critical barrier to mainstream EV adoption – range and charging anxiety. The company has revolutionized the conventional Li-ion battery by designing and synthesizing proprietary organic and inorganic compounds, making it possible to fully charge an EV in just five minutes – the same time it takes to refuel a conventional combustion engine vehicle. StoreDot’s battery technology is optimized for best driver experience with XFC in Li-ion batteries, as well as future technologies for extreme energy-density (XED).StoreDot’s strategic investors include BP, Daimler, Samsung Ventures and TDK.

In 2019, the company achieved a world first by demonstrating the live full charge of a two-wheeled EV in just five minutes. In 2020, the company demonstrated the scalability of its XFC batteries for other devices, by fully charging a commercial drone in five minutes in another world first. Moving XFC battery technology from the lab to a commercially-viable product for the first time, StoreDot has launched engineering samples of its first-generation batteries, designed to be manufactured at scale on traditional Li-ion production lines.