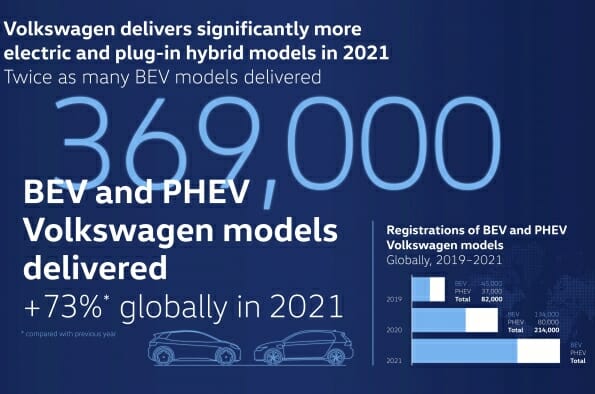 Wolfsburg – “Volkswagen is continuing to press ahead with the transition to e-mobility despite the limited supply of semiconductors,” said Ralf Brandstätter, CEO of the Volkswagen brand. Last year, the company delivered more electric vehicles worldwide than ever before, handing over more than 369,000 electric cars (+73 percent versus 2020), including approximately 106,000 PHEVs (+33 percent) and 263,000 all-electric vehicles (+97 percent) to customers.
Volkswagen thus doubled its BEV deliveries year-on-year. “In a very short time, we have reached a top position for all-electric vehicles in Europe. With our ACCELERATE strategy and the expansion of the model portfolio, we will continue to increase the pace of the e-mobility offensive. Before the end of this year, the ID. BUZZ1 will represent yet another emotional model in our ID. family,” said Brandstätter. Volkswagen delivered around 4.897 million vehicles across all drive systems to customers around the world. This is a decline of around 8 percent compared to the previous year. The lagging supply of semiconductors caused limitations in production throughout the course of the year, which ultimately had a major impact on the unit sales figures. “Volkswagen achieved satisfactory sales under extremely challenging conditions. The massive effects on production brought on by the semiconductor situation could not be entirely compensated for over the course of the year, however. Nonetheless, our record-breaking order backlog of 543,000 vehicles in Europe alone – thereof 95,000 IDs – shows clearly that the demand for Volkswagen vehicles continues to be very high,” said Klaus Zellmer, Board Member for Sales and Marketing at Volkswagen.

Volkswagen doubles deliveries of electric vehicles
The proportion of purely battery-powered electric vehicles (BEVs) and hybrid vehicles nearly doubled to 7.5 percent of total deliveries (2020: 4 percent). In Europa, these vehicles now account for 19.3 percent of Volkswagen’s deliveries (2020: 12.6 percent). Volkswagen recorded a significant increase in deliveries of electric vehicles particularly in the United States, China and Germany. In the company’s home market, one in four Volkswagen vehicles was a plug-in vehicle. The electric offensive in China is on track even though the supply bottlenecks for semiconductors observed towards the end of the year also affected the electric vehicles that had previously been prioritised for production. A total of 77,100 BEVs (+437 percent) were delivered in China, including more than 70,000 from the ID. family, making Volkswagen one of the five biggest BEV providers in China. A further considerable increase is planned for 2022. Close to 17,000 BEVs were sold in the United States, almost twenty times more than in the previous year. This brought Volkswagen up to fourth place among BEV manufacturers.

World car ID.42 is a bestseller
Volkswagen’s most popular BEV model worldwide is the ID.4, which lived up to its name as a world car in its first year on the market. The ID.4 was the most frequently delivered of the 263,000 BEVs with 119,650 units sold, followed by the ID.33 (around 76,000), the e-up!4 (approximately 41,500) and just under 18,000 units of the ID.65, which Volkswagen offers exclusively in the Chinese market. In Europe, the ID.4 topped the BEV charts in Sweden, Denmark, Finland and Ireland. The all-electric SUV ID.4 was also successfully rolled out in the United States with nearly 17,000 units being handed over to customers. In China, the vehicle already ranks second among all-electric SUVs.

Focus on SUVs pays off – Golf still number one
SUVs are the fastest-growing market segment. Volkswagen systematically geared its portfolio to this trend at an early stage. SUVs now make up more than 40 percent of all vehicle deliveries (previous year: 34.8 percent). Volkswagen generated as much as three-quarters of its sales revenue in the United States with SUVs, selling its highest number of vehicles there since 2013. Nevertheless, the Golf held on to its top position as the best-selling car in Germany in 2021 despite the strained supply situation for semiconductors.

Volkswagen expects that the first half of 2022 at least will remain highly volatile and challenging owing to persistent supply bottlenecks for semiconductors.

However, the company expects to be able to stabilise production as the year goes on and lower its high backlog of orders as quickly as possible.

2021 deliveries by the Volkswagen brand by market

1 ID. BUZZ – The vehicle is not yet offered for sale

5 ID.6 – The vehicle is not offered for sale in Europe

The Volkswagen Passenger Cars brand is present in more than 150 markets worldwide and produces vehicles at more than 30 locations in 13 countries. Volkswagen delivered around 5.3 million vehicles in 2020. These include bestsellers such as the Golf, Tiguan, Jetta or Passat as well as the fully electric successful models ID.3 and ID.4. Around 184,000 people currently work at Volkswagen worldwide. In addition, there are more than 10,000 trading companies and service partners with 86,000 employees. With its ACCELERATE strategy, Volkswagen is consistently advancing its further development into a software-oriented mobility provider.